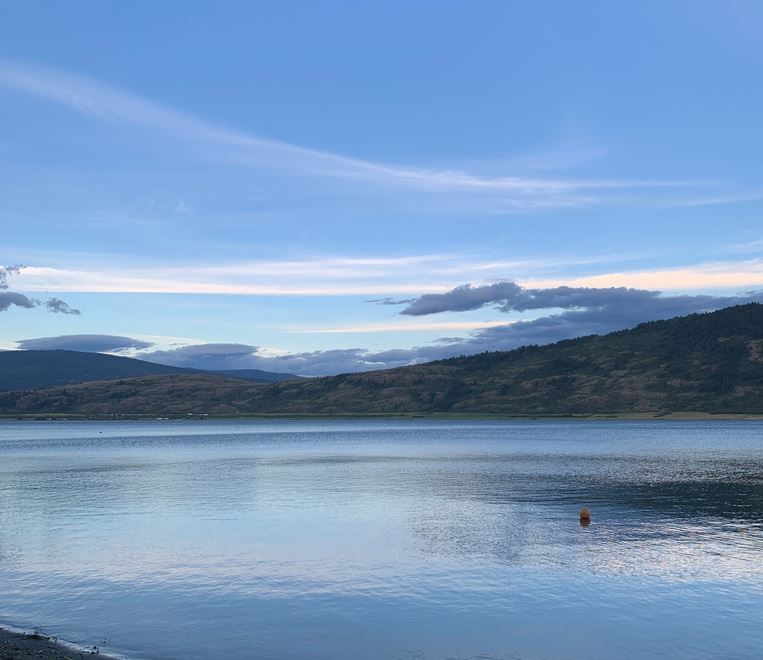 Yesterday I had a perfect swimming moment.

The air, the water and me moved in perfect harmony.

I let the weightless feeling seep into my soul allowing a kinder, gentler view of the world arise.

As I lay in the water, looking to the smoky blue of our Okanagan sky, dragon flies touched down on the tip of my nose. I felt part of the whole in that moment and I floated in the waves from the boats heading home after a day on the lake.

I learned to swim in the river of my childhood. The Salmon River.

During the summer, our afternoons were spent at Gentry’s Pool. Sand, rock cliff and forest surrounded the pool. There was deep, there was shallow and in August, we swam amongst the salmon as they returned to spawn.

There is nothing like that feeling of bumping up against a salmon as they work their way up the river.

It reinforced the knowing that I was {and am} a part of something bigger than just myself.

Swimming lessons continued in Robert’s Lake until I was 12.

For 2 weeks each summer my mother drove a station wagon filled with kids to the lake.

The local loggers had created a swimming area with logs chained together. We swam from log to log and dove from the plank board dock.

My last swimming test was at Robert’s Lake. It was a windy day and the waves filled my nose and mouth as I attempted to turn my head and breathe for the crawl. I passed the test that day and have confidently swam in waves and water all around the world.

Swimming in the lake this summer has been a perfect way to deal with the heat.

Steve and I, sometimes a couple times a day, gather our towels, a snack, a drink, and book and we walk to the beach.

We set up our chairs and then walk into the lake.

Steve takes a dip and I swim. I go out to where I can no longer touch the bottom, and I swim. I float, letting the tension, stiffness, and worries unravel from my body.

Sometimes we are joined by family.

They arrive with kids, dogs and beach toys.

Everyone has a different response to the lake – some sit on the beach, some float, some paddle, some sail.

They all love being at the beach.

My mother insisted that we all learn to swim, for she wanted us to feel safe and confident in the water.

Every lake, river and ocean bay was an opportunity to swim.

Swim suits were optional for her and often she would jump in, ‘bra and panties’ and encourage us all to join her.

This week would have been her 87th birthday {She passed in 1983} and because of her, I swim.